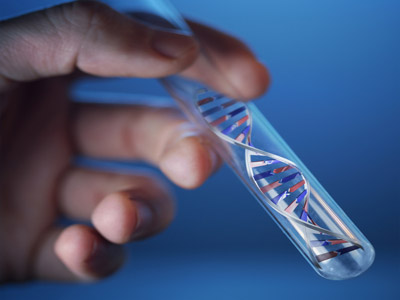 Psychiatric Geneticists Find Common Pathway Contributes to Multiple Disorders
In a study published in the Lancet, the Cross-Disorder Group of the Psychiatric Genomics Consortium, supported by the National Institute of Mental Health, has performed a genomewide single-nucleotide-polymorphism (SNP) data analysis seeking to identify specific variants underlying genetic effects shared between the following five disorders: autism spectrum disorder, attention-deficit/hyperactivity disorder, bipolar disorder, major depressive disorder, and schizophrenia.
Their study is the largest to date and the first to provide evidence that specific SNPs are significantly associated with a range of psychiatric disorders. In particular, they pointed to the effects of voltage-gated calcium channels on such disorders: "Our results implicate a specific biological pathway—voltage-gated calcium-channel signaling—as a contributor to the pathogenesis of several psychiatric disorders and support the potential of this pathway as a therapeutic target for psychiatric disease."
"These important findings indicate that fundamental alterations in brain development and biology can confer vulnerability to various types of mental disorders....," Jeffrey Lieberman, M.D., president-elect of APA told Psychiatric News." Overall, the study provides an important new clue about the etiology and pathogenesis of mental disorders."


APA President Dilip Jeste, M.D., also commented: "Research of this type would help in the development of future diagnostic systems in psychiatry that are based on validated biomarkers...this important study is one step in that direction."